Poster for Harry Hill’s 1995 stand up tour, “Harry Hill – Live”. The poster is in good condition and has previously been stored folded.

The poster is in good condition and has previously been stored folded.

Hill was born as Matthew Keith Hall in Woking, Surrey on 1 October 1964 and grew up in Staplehurst, Kent, where he attended the local primary school.

At the age of 14, Hill’s family moved to Hong Kong for two years where he attended Island School. He was later educated at Angley School and then Cranbrook School in Kent and St George’s Hospital Medical School before training in neurosurgery at the University of London.

Hill worked as a house officer at Doncaster Royal Infirmary, before quitting the medical profession because he “didn’t feel in control of what was happening”. 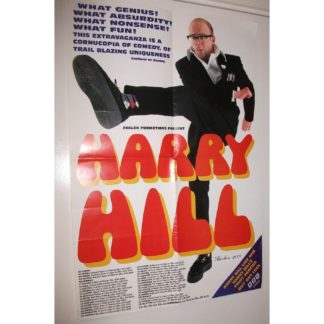