Original 1957  foyer poster from the Continental and Classic  Cinemas, Winton / Southbourne in Bournemouth.

The poster details the films showing from Thursday 14th February for 7 days.

Original 1957 foyer poster from the Continental (Winton and Classic (Southbourne) Cinemas in Bournemouth.

The films showing were;

Opened in 1919, the first advertisement in the Bournemouth Echo was for the 6th, 7th and 8th October of that year. The programme consisted of the main feature ‘Ordeal of Rosetta’ plus part one of ‘Adventure Among The Cannibals’. The proprietor and manager was Mr J Newbury with the orchestra under the direction of Mr T E Denny. A featured comedian Sydney Drew also put in an appearance. The Embassy billed itself as ‘the finest ventilated hall in the provinces’.

The picture above was taken when the Palladium was showing a 1932 picture from First National, ‘The Honourable Mr Wong’ starring J Carroll Naish and Loretta Young. Interesting that even in those days there were reduced prices for admission to matinees. Note the small sweet shop to the right of the entrance the Continental had one as well, forerunners of today’s multiplex foyer offerings.

Tuesday 29th June 1948 was the last day of film presentation under the Palladium banner. The programme consisted of the Gainsborough picture ‘The Root of All Evil’ starring Phyllis Calvert and Michael Rennie with supporting feature ‘Strange Conquest’ starring Jane Wyatt and Julie Bishop. In the Daily Echo of Wednesday 30th. the name had changed to Embassy (formerly Palladium) and ‘A grand offering in Technicolor’ was promised. This was ‘Desert Fury’ starring Burt Lancaster and Lizabeth Scott with supporting feature ‘Hot Cargo’ starring William Gargan and Jean Rogers.

The Embassy closed again from Monday March 22nd 1954 for alterations and decorations. One can surmise that this involved the installation of Cinemascope and that by 1954 wartime building restrictions had come to an end so renovation was possible.

Be the first to review “1957 – Continental and Classic Cinemas, Bournemouth” Cancel reply 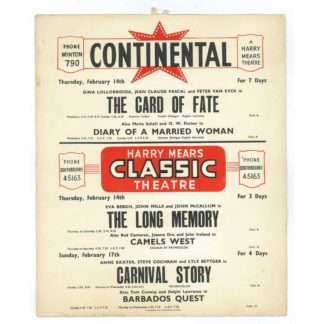