An original pin badge from Butlin’s, Skegness for the 1949 season.

An original pin badge from Butlin’s, Skegness for the 1949 season.

During the early 1930s Butlin joined the board of Harry Warner’s holiday camp company (now Warner Leisure Hotels) and in 1935 he observed the construction of Warner’s holiday camp in Seaton, Devon. Butlin learned from the experience of Warner, and employed the workers who had constructed the Seaton camp to come to Lincolnshire to build his new camp at Skegness.

Construction began in September 1935 with the local paper reporting the first sod being turned on the 4th of that month.

Butlin designed the camp himself and said of the camp, “my plans were for 1,000 people in 600 chalets with electricity, running water, 250 bathrooms, dining and recreational halls. A theatre, a gymnasium, a rhododendron bordered swimming pool with cascades at both ends and a boating lake.” However Butlin hired the architect Harold Ridley Hooper, to draw up the formal plans for the camp buildings.

In the camp’s landscaped grounds, there were to be tennis courts, bowling and putting greens and cricket pitches. The total cost of the project was £100,000 (2011:£5.7 million) and despite having suffered a financial shortfall during construction, the camp opened on schedule in 1936. One of the original 1936 chalet accommodation units is still present and is now a grade II listed building, recognising its historical significance.

He opened his camp on 11 April 1936 (Easter Even). It was officially opened by Amy Johnson from Hull, who had been the first woman to fly solo from England to Australia. An advertisement costing £500 (2011:£28 thousand) was placed in the Daily Express, announcing the opening of the camp and inviting the public to book for a week’s holiday. The advertisement offered holidays with three meals a day and free entertainment with a week’s full board, at a cost of between 35 shillings (£1.75) and £3 (2011:£167.00), according to the time of year. The advert proved successful, and over the first summer season the capacity of the camp had to be increased from 500 to 2,000, to cope with the demand.

When the camp opened, Butlin realised that his guests were not engaging with activities in the way he had envisioned, as most kept to themselves, and others looked bored. He asked Norman Bradford (who was engaged as an engineer constructing the camp) to take on the duty of entertaining the guests which he did with a series of ice breakers and jokes. By the end of the night the camp was buzzing and the Butlin’s atmosphere was born. From that point on, entertainment was at the very heart of Butlin’s and Bradford became the first of the Butlin’s Redcoats. That night Butlin decided that for his camp to work he would require an army of people to carry out the same job as Bradford, and the role of Redcoat was formed.

In 1938 Butlin won the contract to supply amusements to the Empire Exhibition in Glasgow.[notes 6] After the exhibition was complete, Butlin returned with some of the infrastructure. His Clacton camp and Sheerness amusement park each received miniature railways, while Skegness received a building in the shape of the “Butlin theatre” which was later renamed the “Gaiety”.

Butlin continued to increase the capacity of the camp until 3 September 1939 when the Second World War was declared. The next morning, the campers were sent home and the site was taken over by the Royal Navy for use as a training establishment.

Once the Navy took over, the camp became known as HMS Royal Arthur and was used to train sailors for the war effort. In order to operate as a military base, many of the bright external colours were painted over, the dance hall became an armoury, and the rose beds were dug up, to become sites for air raid shelters.

While the outside was repainted, much of the interior décor went unchanged. Speaking of his time there George Melly reported that Royal Arthur had “a certain architectural frivolity inappropriate to a Royal Navy Shore Establishment.” Melly went on to mention how the main reception still had a sky scene with clouds painted on the ceiling and a large artificial (though realistic) tree in the centre of it. He also noted that their meals were served from an approximation of an Elizabethan inn named “Ye Olde Pigge and Whistle”.

During the war, the German airforce bombed Royal Arthur 52 times, including one incident on 21 August 1940 when an attack led to damage or demolition of 900 small buildings. By the end of the conflict however, the camp’s condition was good enough that it took only 6 weeks for Butlin to repair the wartime damage and reopen the camp to the public on 11 May 1946.

After reopening, some signs of military occupation remained with one observer noting that the blankets supplied to campers retained the insignia of HMS Royal Arthur. 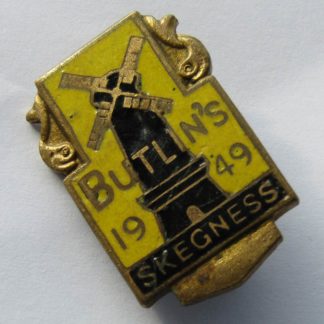