Original 1954 foyer poster from the Continental Cinema, Winton in Bournemouth.

The poster details the films showing from Sunday 17th January for 7 days.

Original 1954 foyer poster from the Continental Cinema, Winton in Bournemouth.

The poster details the films showing from Sunday 17th January for 7 days.

Be the first to review “1954 – Continental Cinema, Bournemouth” Cancel reply 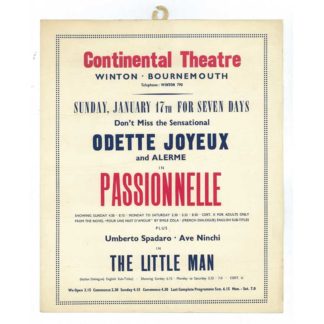