An original pin badge from Butlin’s, Minehead for the 1966 season.

An original pin badge from Butlin’s, Minehead for the 1966 season.

In the winter of 1961, Billy Butlin began work on creating his camp in Minehead. The site was selected because of its flatness, good rail links, and proximity to the town and sea. The site was not without its problems, however, including flooding. In order to solve this, a trench was excavated around the site and an earth wall constructed. The trench later became the site’s boating pond.

The site opened to the public on 26 May 1962, the construction having cost £2 million. Over the next decade several attractions were added: the miniature railway in 1964, the chairlifts in 1965, and the monorail in 1967. Full size locomotives, Duchess of Hamilton and Knowle, were added in 1964. The locomotives left the camp in 1974 and have since been restored and preserved.

Butlins Minehead underwent major development during the 1980s, when problems with flooding were finally fixed, and both the indoor and outdoor swimming pools were converted into funpools with the addition of waterslides, water cannons, and various other novelty features. Additional accommodation was constructed, and caravan accommodation was introduced. Following the redevelopment work, the camp was renamed Somerwest World.

As at Bognor and Skegness, Minehead resort underwent further changes in 1998 and 1999 with the demolition of the Windsor building, relocation of the outdoor funpool and construction of the Skyline Pavilion in its place. However the changes at Minehead were less extensive than at the other two remaining Butlins resorts, and most of the original structures and layout remained intact. In 2007, further work in the Minehead resort was undertaken with the creation of new luxury timeshare apartments known as BlueSkies. 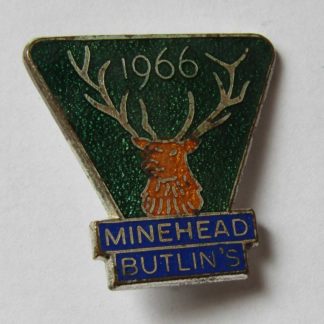