The format of Whizzer and Chips was to have the comic divided into two separate parts, a novel idea at the time. One part was called Whizzer and the other was called Chips, with Chips existing as a separate pull-out section in the middle.

The slogan was “Two comics in one, double the fun!”. It had no relation to earlier British comic Illustrated Chips. In the offices at Fleetway, it was always regarded as one comic.

In common with most British comics of the time, both sections originally had some of their strips printed in semi-colour using black, white, and red (duotone), with others in plain black and white.

To reinforce the distinction between the two sections, the duotone strips in Chips were later changed to black, white, and blue. Whizzer and Chips went full colour on the week of 4 May 1990.

Extract from Whizzer and Chips entry on Wikipedia</p

Click here to see all our editions of Whizzer and Chips. 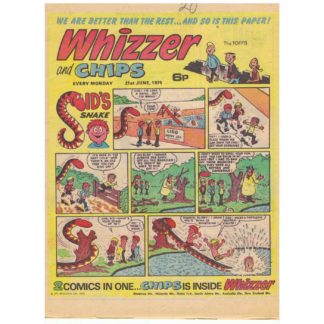