New Musical Express (NME) was the first British paper to include a singles chart, in the edition of 14 November 1952. In the 1970s it became the best-selling British music newspaper.

NME started as a music newspaper, and gradually moved toward a magazine format during the 1980s and 1990s, changing from newsprint in 1998.

In February 2015, it was reported that the NME was in discussions about removing the cover price and becoming a free publication. This was confirmed in July 2015.

The free NME launched on 18 September 2015, with Rihanna on the cover. Distributed nationwide via universities, retail stores and the transport network, the first circulation numbers published in February 2016 of 307,217 copies per week were the highest in the brand’s history. Since relaunch the magazine has featured a number of high-profile international pop stars on the cover such as Coldplay, Taylor Swift, Lana Del Rey, Kanye West and Green Day alongside emerging talent like Zara Larsson, Years & Years, Lady Leshurr and Christine and the Queens.

The free, pop-oriented NME magazine has been praised for reconnecting NME with its target audience, and was awarded a silver at the 2016 Professional Publishers Association Awards for its historic first-ever cover as a free title, featuring Rihanna.[39] Editor in Chief Mike Williams received the Editor Of The Year Award at the BSME Awards 2016, the judges stating that under Williams’ leadership, NME had “bounced back from an uncertain future and established itself confidently and creatively in a new market.”

In March 2018, the Guardian reported that the NME was to cease publication in print after 66 years. The online publication would continue.

In 2019, TI Media, the successor to IPC, sold NME and Uncut to Singaporean company BandLab Technologies. 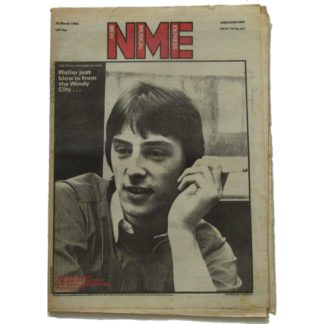