Roy of the Rovers

Roy of the Rovers is a British comic strip about the life and times of a fictional footballer and later manager named Roy Race, who played for Melchester Rovers. The strip first appeared in the Tiger in 1954, before giving its name to a weekly (and later monthly) comic, published by IPC and Fleetway from 1976 until 1995, in which it was the main feature.

The weekly strip ran until 1993, following Roy’s playing career until its conclusion after he lost his left foot in a helicopter crash. When the monthly comic was launched later that year the focus switched to Roy’s son Rocky, who also played for Melchester. This publication was short-lived, and folded after only 19 issues. The adventures of the Race family were subsequently featured in the monthly Match of the Day football magazine, in which father and son were reunited as manager and player respectively. These strips began in 1997 and continued until the magazine’s closure in May 2001.

In 2018, following the acquisition of the strip’s rights by comic book publisher Rebellion, a brand new rebooted Roy of the Rovers story, following the adventures of a 16-year-old Roy in the present day, began publication as a series of original graphic novels and prose novels.

Football-themed stories were a staple of British comics for boys from the 1950s onwards, and Roy of the Rovers was the most popular.[1] The strip usually saw Rovers competing for honours at the top of the English and European game, although in some years the storylines would see the club struggle for form, including a relegation from the First Division in the early 1980s. As well as dealing in on-pitch action, Roy of the Rovers featured high drama off the pitch, with kidnapping storylines a recurring feature of its early decades. From the 1970s onwards, stories included a shooting, a terrorist atrocity, and several celebrity guest appearances. Rovers played in a fictional universe made up of invented teams; however, real-life players including Emlyn Hughes, Bob Wilson and Malcolm Macdonald made appearances in the strip, as did former England manager Alf Ramsey.

The stock media phrase “real ‘Roy of the Rovers’ stuff” is often used by football writers, commentators and fans when describing displays of great skill, or surprising results that go against the odds, in reference to the dramatic storylines that were the strip’s trademark.

More editions of Roy of the Rovers available at verycollectable.com 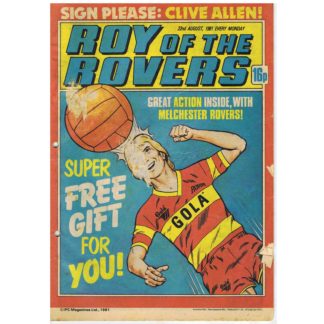