Eagle was a British children’s comics periodical, first published from 1950 to 1969, and then in a relaunched format from 1982 to 1994. It was founded by Marcus Morris, an Anglican vicar from Lancashire. Morris edited a Southport parish magazine called The Anvil, but felt that the church was not communicating its message effectively. Simultaneously disillusioned with contemporary children’s literature, he and Anvil artist Frank Hampson created a dummy comic based on Christian values. Morris proposed the idea to several Fleet Street publishers, with little success, until Hulton Press took it on.

Following a huge publicity campaign, the first issue of Eagle was released in April 1950. Revolutionary in its presentation and content, it was enormously successful; the first issue sold about 900,000 copies. Featured in colour on the front cover was its most recognisable story, Dan Dare, Pilot of the Future, created by Hampson with meticulous attention to detail. Other popular stories included Riders of the Range and P.C. 49. Eagle also contained news and sport sections, and educational cutaway diagrams of sophisticated machinery. A members club was created, and a range of related merchandise was licensed for sale.

Amidst a takeover of the periodical’s publisher and a series of acrimonious disputes, Morris left in 1959; Hampson followed shortly thereafter. Although Eagle continued in various forms, a perceived lowering of editorial standards preceded plummeting sales, and it was eventually subsumed by its rival, Lion, in 1969. Eagle was relaunched in 1982 and ran for over 500 issues before being dropped by its publisher in 1994.

Mergers with other comics

In the twentieth century it was standard practice in the British comics industry to merge a comic into another one when it declined in sales. Typically, three stories from the cancelled comic would continue for a while in the surviving comic, and both titles would appear on the cover (one in a smaller font than the other) until the title of the cancelled comic was eventually dropped. In this way, two comics were merged with the original Eagle, Swift in 1963 and Boys’ World in 1964, before the Eagle itself came to an end when it was merged with Lion in 1969. 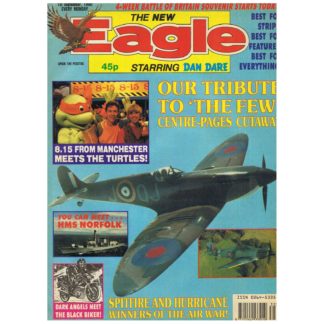