An original vintage edition of Look-in magazine. This edition is dated 18th February 1985 and is in good condition.

Look-in had interviews, crosswords and competitions, and it had pictures and pin-ups of TV stars and pop idols of the time. Its main feature however was the many comic strips of the favourite children’s television programmes, all of which were being shown on the ITV network at the time.

When the magazine began publication, it was edited by Alan Fennell and the strips were written by Angus Allan. Fennell left in 1975, and the art editor, Colin Shelborn, took over as editor. The covers in the 1970s were paintings by Arnaldo Putzu, an Italian working in London who had created many cinema posters in the 1960s, including designs for the Carry On films. His Look-in covers were mostly painted using acrylics.

Introduced mainly as a vehicle for children to find out what was on ITV, it included highlight listings for each ITV region, of programmes likely to appeal to its target market, but Look-in also spotlighted popular children’s topics and pastimes of the day. Skateboarding, BMX and YoYoing were all featured in the magazine. Although primarily a television magazine, it also often featured articles on sport such as On The Ball with Brian Moore, as well as science articles written by Peter Fairley. DJ Ed Stewart became a regular face in Look-in, appearing in the first issue in a feature about a day in his life, he was later given his own pages called ‘Stewpot’s Newsdesk’ which ran until 1980. Alan Fennell who edited Look-in wrote episodes for most of Gerry Anderson’s series.

After television, the next biggest topic featured was pop music. This usually comprised interview articles and pull-out pin-ups of the top acts of the day, from ABBA and the Bay City Rollers in the 1970s to Adam and the Ants and Bros in the 1980s. Picture strips on pop groups at first featured life stories on ABBA and The Beatles (among others) and went on to become original adventures stories for groups such as Madness and Bucks Fizz.

In September 1981 Look-in changed its look, adopting a new logo and with photo covers replacing the cover paintings. By the late 1980s, the comic was struggling to compete with glossier teen magazines and sales were dropping. By the early 1990s, Look-in was catering for a younger age group by featuring picture strip stories based on cartoons and short and choppy fact-file type articles. The final issue was published in 1994.

During its run, Look-in annuals and Summer Special issues were released each year. In 2007 Carlton Books published a compilation reprint; Best of the Seventies, under their Prion and Sevenoaks imprints. This was followed-up by a Best of the Eighties the following year. 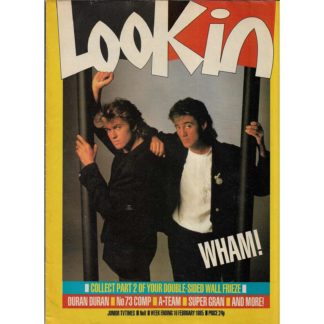