An original copy of Punch magazine.

An original vintage edition of Punch magazine. This edition is dated 26th January 1966.

Punch, or The London Charivari, was a British weekly magazine of humour and satire established in 1841 by Henry Mayhew and wood-engraver Ebenezer Landells. Historically, it was most influential in the 1840s and 1850s, when it helped to coin the term “cartoon” in its modern sense as a humorous illustration.

Illustrator Archibald Henning designed the cover of the magazine’s first issues. The cover design varied in the early years, though Richard Doyle designed what became the magazine’s masthead in 1849. Artists who published in Punch during the 1840s and ’50s included John Leech, Doyle, John Tenniel, and Charles Keene. This group became known as “The Punch Brotherhood”, which also included Charles Dickens, who joined Bradbury and Evans after leaving Chapman and Hall in 1843. Punch authors and artists also contributed to another Bradbury and Evans literary magazine called Once A Week (est. 1859), created in response to Dickens’ departure from Household Words.

Punch material was collected in book formats from the late 19th century, which included Pick of the Punch annuals with cartoons and text features, Punch and the War (a 1941 collection of WWII-related cartoons), and A Big Bowl of Punch – which was republished a number of times. Many Punch cartoonists of the late 20th century published collections of their own, partly based on Punch contributions.

In early 1996, businessman Mohamed Al-Fayed bought the rights to the name, and Punch was relaunched later that year. The new version of the magazine was intended to be a spoiler aimed at Private Eye, which had published many items critical of Fayed. Punch never became profitable in its new incarnation, and at the end of May 2002, it was announced as once more ceasing publication. Press reports quoted a loss of £16 million over the six years of publication, with only 6,000 subscribers at the end.

In 2004, much of the archives was acquired by the British Library, including the Punch table. The long, oval, Victorian table was brought into the offices some time around 1855, and was used for staff meetings and on other occasions. The wooden surface is scarred with the carved initials of the magazine’s longtime writers, artists, and editors, as well as six invited “strangers”, including James Thurber and Prince Charles. 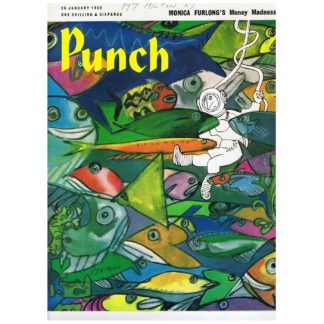