When the magazine was a BBC publication, the covers had a BBC bias (in 2005, 31 of the 51 issues had BBC-related covers) and consisting of a single side of glossy paper, however, the magazine often uses double or triple-width covers that open out for several large group photographs.

While the major events (such as Remembrance Day, Crufts, BAFTAs, Wimbledon Championships, Glastonbury Festival and the Proms) or new series of popular programmes are marked by producing different covers were actually used for other collectors:

On 10 May 1945, two days after VE Day, the Radio Times declared ‘Victory Number’ containing 24 pages of BBC radio programmes for the next eight days, with a special illustrated cover designed by Terry Freeman, incorporating the V sign as twin bursts of spotlights above the London skyline.

On 10 July 1969, Radio Times celebrated the Apollo 11 moon landing with this cover bearing the “TARGET MOON” caption at the top of the Saturn V rocket lifts off from Kennedy Space Center (on 16 July) as part of the NASA’s Apollo mission before landed on the moon on 20 July. On 6 July 2019, a special eight-page, pull-out colour supplement marking for the 50th anniversary of Apollo 11.

On 10 December 1988, Alice Roberts won the Blue Peter ‘Young Artists’ competition at the age of 15, with her picture and the presenters appeared on the front cover, now a familiar face as a television presenter on various science and history documentary programmes is one of the regular co-presenters of BBC Two’s geographical and environmental series Coast from 2005 to 2015.

From 23 February 1991 during the deregulation of television listings, Radio Times began offering a comprehensive programme schedule guide to BBC, ITV, Channel 4 and satellite on 1 March (which falls on a Friday), bearing the “If it’s on, it’s in” tagline, which features Arnold Schwarzenegger appeared on the front cover, focusing about the former Mr. Universe and successfully become the biggest film career in Hollywood.

On 10 February 2007, the second series of Life on Mars was marked by the Radio Times producing a mock-up of a 1973-style cover promoting the series, placed on page three of the magazine.

On 5 May 2020, as Radio Times reaches its 5,000th edition with excellent lead articles from the support staff and workers of the National Health Service front line protecting the COVID-19 pandemic (also known as the coronavirus disease) to saving millions of lives, and also granted this special cover showing the colours of the rainbow which uses acrylic paint in a plain white background.

Each year, the Radio Times celebrates those individuals and programmes that are featured on the cover at the Radio Times Covers Party, where framed oversized versions of the covers are presented.

Radio Times had several sporting events with more than one of the Home Nations (such as the Five/Six Nations, UEFA European Championship, Commonwealth Games and the Rugby World Cup) taking part are often marked with different covers for each nation, showing their own team.

Doctor Who is the most represented programme on the cover, appearing on 29 issues (with 35 separate covers due to multiples) in the 49 years since the programme began on 23 November 1963. 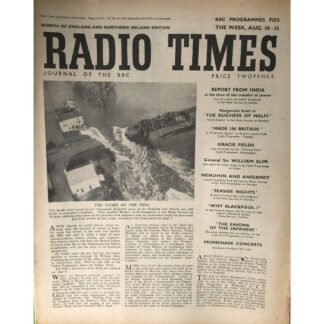